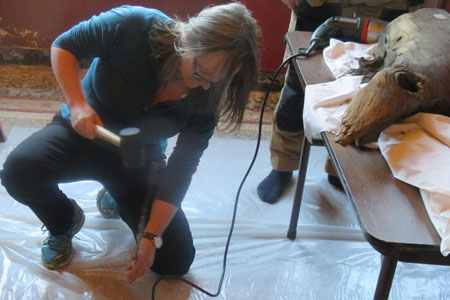 Aoife is the Principal Investigator of the project ‘Northern Europe's timber resource - chronology, origin and exploitation’ (TIMBER). For over 20 years I have worked with remains of historical timber, particularly to identify the dating and origin of the wood. Assembling the results of analysis of timber from an enormous variety of usage contexts (buildings, ships, urban vs. rural) and status (e.g. castle vs. cottage) allows the timing, extent and geography of the exploitation of this resource to be described.

This project builds a multi-disciplinary team to analyse the material and written evidence for timber usage over six centuries (c. 1100-1700). Taking specific case studies, the region of origin of timber is being analysed using several scientific methods. Some methods are tried and tested, some highly experimental. Identifying the timber source and the timber destination and using high-precision dating that dendrochronology provides, we are studying the changes, through time, in the availability and exploitation of this essential resource.

This project has received funding from the European Research Council (ERC) under the European Union’s Horizon 2020 research and innovation programme (grant agreement No. 677152).

The most relevant publications: